Jews in the United Kingdom now number approximately 300,000 and England contains the second largest Jewish population in Europe and the fifth largest Jewish community worldwide. The population peaked in the decades following the Second World War, due to the influx of a large number of refugees from continental Europe.

Around two-thirds of British Jews live in Greater London and the surrounding areas (approximately 200,000 people). Other major communities are Greater Manchester (38,000), Leeds (8,000), Greater Glasgow (4,000), Brighton and Hove (4,000). There are also significant communities in Birmingham, Southend-on-Sea, Liverpool, Bournemouth and Gateshead, with smaller communities spread across the country.

While the majority of British Jews live in England, there are over 6,000 in Scotland, some 2,000 in Wales, and a few hundred in Northern Ireland. A small community also exists in Jersey (in the Channel Islands).

The history of Jews in England dates back to Roman times, but in the modern period to the 11th Century and the reign of William I, the first Norman King of England. Although from the earliest days of their presence, Jews faced increasing persecution, there were also periods of acceptance. One of the oldest Colleges at Oxford University, Merton College, was reputedly founded with help from a local Jew. However, King Edward I issued an Edict of Expulsion in 1290.

After the expulsion there was no Jewish community, apart from individuals who practiced Judaism secretly, until Lord Protector Oliver Cromwell permitted Jews to live in England again in 1656, effectively nullifying the edict. A small colony of Sephardic Jews from the Netherlands was the first to establish a community.

Historians date Jewish emancipation to either 1829 or 1858 when Jews were finally allowed to sit in Parliament, though Prime Minister Benjamin Disraeli, born Jewish but subsequently baptized as a Christian, had been a Member of Parliament long before this.

In 1846, the British law “De Judaismo,” which prescribed a special dress for Jews, was repealed.

Due to the lack of anti-Jewish violence in Britain in the 19th Century, it acquired a reputation for religious tolerance and attracted significant immigration from Eastern Europe. In the 1930s and 1940s, many European Jews fled to Britain to escape the Nazis.

The Board of Deputies of British Jews is the representative organization for the United Kingdom’s Jewish community and is comprised of delegates from synagogues and communal organizations spanning the entire religious spectrum. In existence for over 250 years, the Board is regarded by government as the legitimate voice of the community. It represents the community’s interests in areas such as interfaith relations, media response, politics and advocacy. The Board also forms strategic partnerships with other communal organizations and works closely with unaffiliated sectors of the community, such as the Strictly Orthodox, on matters of mutual concern.

There are around 100 Jewish day schools in Britain, mainly in London and Manchester, but also in Birmingham, Gateshead, Glasgow, Leeds and Liverpool. A majority of Jewish children aged 5-17 now attend Jewish day schools.

There are also important Jewish Studies departments at many British Universities. In addition, adult education is available through institutions such as the London School of Jewish Studies, the London Jewish Cultural Centre, and the Oxford Centre for Hebrew and Jewish Studies.

Welfare agencies and organizations such as Jewish Care, which supports a number of retirement homes, are given high communal priority.

Support for Israel is fostered by various pro-Israel or purely philanthropic organizations. A variety of Zionist youth movements catering to all religious and political persuasions are active and successful in promoting attachment to Israel and Aliyah.

Several weekly Jewish newspapers are published. The Jewish Chronicle, founded in 1841, it is the oldest continuously published Jewish newspaper in the world. Other media include the Jewish News and the Jewish Telegraph. In addition, the Jewish Tribune and Hamodia target the Strictly Orthodox community. Cultural and literary magazines include the “Jewish Quarterly” and the monthly “Jewish Renaissance”. Jews are active and prominent in all professions and in the political arena, rising to senior positions in government as well as in the judiciary and every facet of public life.

There are over 400 synagogues in Britain, with around three quarters of British Jews belonging to a synagogue. The synagogues are classified as either Central Orthodox, Reform, Strictly Orthodox, Liberal, Sephardi and Masorti, although in practice, these distinctions are not always clear-cut. The Central Orthodox strand, with 55% of Jewish membership, still comprises the majority of affiliated British Jews. There is a variety of synagogues, Jewish schools and active Jewish societies in Scotland and Wales. Northern Ireland and the Channel Islands, Chief Rabbi Ephraim Mirvis holds the position of Chief Rabbi of the United Hebrew Congregations of the British Commonwealth. Chief Rabbi Mirvis succeeded Lord Jonathan Sacks. Kosher meat and food is readily available in London through a number of kosher stores, butcheries, restaurants and caterers. Smaller communities have more limited facilities, but kosher food can be found in most parts of the country.

The United Kingdom established diplomatic relations with Israel in 1948. Since 1948, 26,500 British Jews have emigrated to Israel.

Sites of Jewish interest include Jewish Museums in London and Manchester and the Bevis Marks Synagogue, which dates from 1701. The medieval home of Aaron the Jews is located in Lincoln.

In 1996, a Holocaust education center, the first of its kind in the UK, was opened near Nottingham. A number of Jewish cemeteries dating from the 18th Century can also be found across the country. Walking tours of the Jewish East End of London, where many immigrants arrived in the late 19th and early 20th Centuries are frequently arranged. Many British museums, the British Library and Colleges at Oxford and Cambridge Universities have exhibits of Jewish interest. The British Museum on Great Russell Street contains an ancient Palestine Room. Their manuscript department holds the original Balfour Declaration; The National Gallery has several of Rembrandt’s paintings of Jewish characters; The Victoria and Albert Museum contains various ancient Jewish artifacts; A new Holocaust exhibit displaying rare items from former Nazi concentration camps is now opened at the Imperial War Museum; Ramsgate (near London) is the site of the Montefiore estate where Moses Montefiore lived. The site encompasses his private mansion and synagogue that he built.

Board of Deputies of British Jews 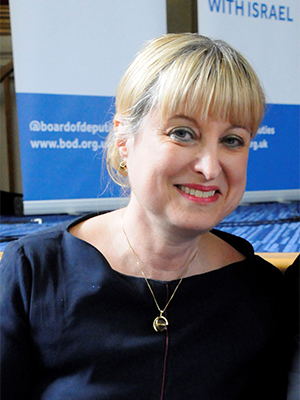 Marie van der Zyl was today re-elected as President of the Board of Deputies, after defeating Jonathan Neumann in the Triennial President elections.

The Board of Deputies of British Jews has overwhelmingly backed action on climate change in the final vote of the current triennial.

Crush at the event in northern Israel was the 'very opposite of what should have happened', Chief Rabbi Mirvis said, as he led the community in tribute to the 45 dead.