The campaign, entitled #SeLuzenlaOscuridad (Be light in the darkness), will be launched together with the Amical de Mauthausen association on January 27, 2021.

“With the health restrictions in place due to covid-19 pandemic preventing face-to-face events from being held this year. By taking part in the #SeLuzenlaOscuridad campaign, we can still show our commitment to Holocaust remembrance,” read a statement by the FCJE.

The campaign calls on all those wishing to participate  to upload a photo or short video with this hashtag on social media and to “tell the story of those who can no longer tell it in the first person, so that each one of becomes a light in the darkness of the most terrible chapter in Europe’s history”.

The FCJE also paid tribute to Holocaust survivors Isaac Revah and Annette Cabelli, who recently passed away having fulfilled their wish to become Spanish citizens through the Law of 24 June 2015, regarding the  granting of Spanish citizenship to Sephardic Jews originating from Spain. 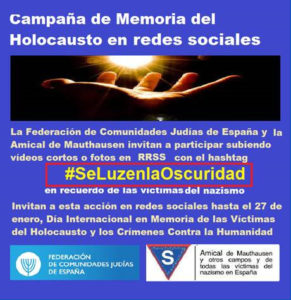 The Ibn Gabirol Association, the cultural wing of the Federation of Jewish Communities of Spain (FCJE) has launched a new website.
Read more
Spain

The European Union of Jewish Students (EUJS) and the Federation of Jewish Youth in Spain (FEJJE) are calling on the Universidad Complutense de Madrid to expel a student who made shocking antisemitic remarks at a neo-Nazi march.
Read more
Spain

The Cardinal Archbishop of Madrid, Carlos Osoro, has called the President of the Federation of Jewish Communities of Spain (FCJE), Isaac Benzaquén, to express his solidarity in the aftermath of the "intolerable attacks" against the Jewish community during a march in honour of the Pro-Nazi Blue Division.
Read more
Spain

“The Jew is the culprit”, say neo-Nazis at Madrid march

About 300 neo-Nazis marched through Madrid to pay tribute to the Blue Division, the Spanish volunteers who fought alongside the Nazis in World War II.
Read more
Spain

The Spanish Senate marked the 76th anniversary of the liberation of the Auschwitz-Birkenau death camp with a ceremony held at the plenary.
Read more
Spain

Graffiti reading “good Jew dead Jew" and “murdering Jews we will hang you” were written on the gate of a Jewish cemetery near Madrid.
Read more

Get the EJC newsletter, including the latest statements and news from the European Jewish communities, direct to your inbox.