“The pandemic has created the social conditions where antisemitism thrives,” Moshe Kantor warned at the release of Antisemitism Worldwide report

(Tel Aviv, April 7, 2021) – The significant rise in extremism and the widespread increase in antisemitic conspiracy theories over the last year could have profound effects on Jewish communities in a post-Pandemic world, Dr. Moshe Kantor, President of the European Jewish Congress, said at the release of the Annual Report on Antisemitism Worldwide 2020, by the Kantor Center at Tel Aviv University.

“2020 was a year of social disorder, and deep global polarization. The pandemic has created the social conditions where antisemitism, racism and extremism thrive.” Dr. Kantor said.

“In the past year, conspiracy theories have spread about Jews, the Jewish people or the state of Israel, as being behind the pandemic, or profiting from it,” he added. “The constant focus on the role of Jews behind global events shows that antisemitism, as the center of conspiracy theories, has not gone away.”

While fewer physical attacks took place, because of lockdowns and severe restrictions, far more hate against Jews was spread online where accusing Jews and Israel for the Coronavirus was easily spread, resulting in the expansion of extremist groups.

Dr. Kantor also expressed concern at the effect on people, and particular the younger generation, of the spread of online hate.

“Young people have been forced to stay indoors during an important part of their formative years, while being exposed 24/7 to online antisemitism, manipulation and disinformation. Dr. Kantor said.

“We must do more to engage with young people through the tools that they themselves use as primary sources of information on social media and in the digital world,” he added.

According to the report, in most countries a decrease was observed in violent incidents, attacks on both people and property and threats and arson, but the number of attacks against Jewish sites and communal property increased. 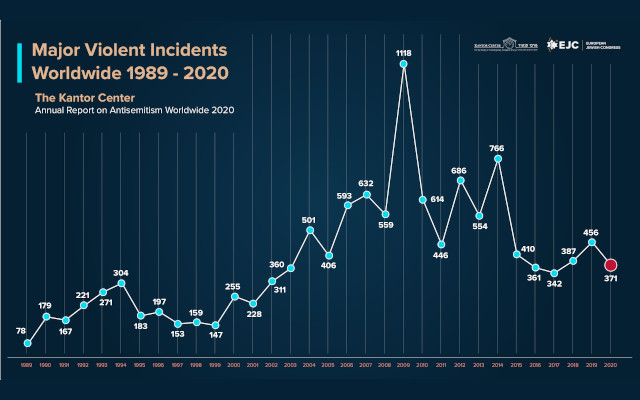 • However, a rise of 24.7% was observed in desecrations of Jewish cemeteries and vandalizing of Holocaust memorials and other Jewish monuments – from 77 to 96 incidents in 2020, because these sites are open and unprotected.

• The number of vandalized synagogues also increased, by 18.9%, from 53 to 63. Most recently, the synagogue of Norrköping, Sweden, was desecrated by Neo-Nazis, on the first night of Passover. 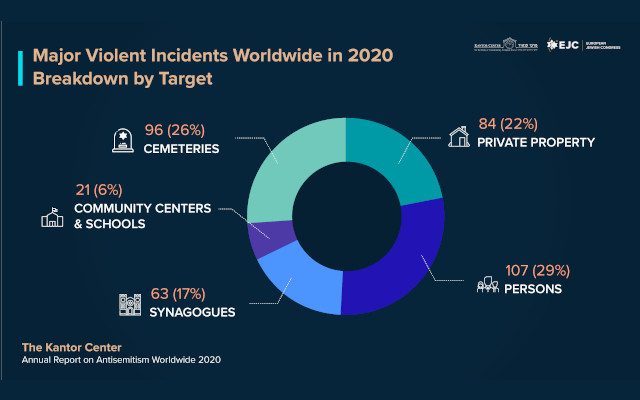 A rise was registered in Ukraine, and a decline in Australia, the UK and especially in France and Canada.

Worrying trends continued in Germany and the USA. In Germany, a rise was recorded in the total number of incidents, with the opposition to vaccines generating comparisons to the Holocaust, and continued desecration of Jewish memorials and cemeteries.

In the US, antisemitic activities on the internet intensified, conspiracy theories have become more rampant and boosted the activities of white supremacists and QAnon.

The pandemic, and measures taken to stem its spread, live restrictions and the vaccines, have led to inappropriate comparisons with Jewish suffering during the Holocaust.

“The use of Holocaust imagery surrounding the Coronavirus has become rampant,” Dr. Kantor said. “Lockdowns are being compared to ghettos and concentration camps; vaccines are being described as wicked medical experiments, and people who refuse these life-saving vaccines are claiming to be persecuted and are wearing yellow stars.” 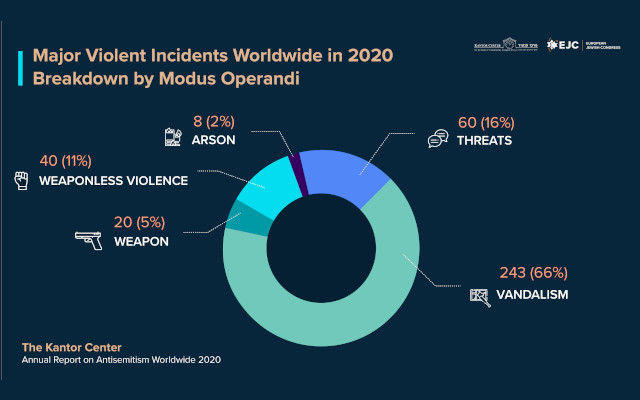 Dr. Kantor also spoke about the greater attention online hate was receiving, including action taken by some of the social media companies and governments to stem the flow of hate.

The good news is thanks to greater oversight and action by the major social media companies, and stronger national legislation against online hate, the number of antisemitic incidents on the main platforms has decreased,” Dr. Kantor said.

“However, while these responses are welcome and necessary, they will not stop online hatred by themselves. As the report shows, hate will simply move further underground to other platforms.”

The report also shows that in the US a gradual rise in violent incidents has been observed for several years, reaching 119 this year, and Germany also saw a significant escalation, of 24% in the total number of criminal offences motivated by antisemitism, reaching 2,275 (compared to 1,839 in 2019) – the highest number recorded since 2001 – including 59 violent incidents. In both countries, vandalism accounted for most of the incidents.

Most incidents occurred in countries with large Jewish communities: the US, Canada, the UK, Australia, France and Germany. In all other countries, with the exception of Ukraine, less than 10 incidents (per country) occurred in 2020. 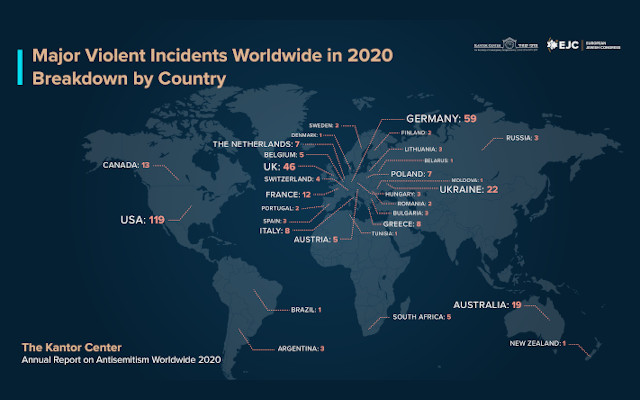