The Jewish Community of the Republic of Macedonia is one of the five religious communities included in the Constitution of the Republic. With its 250 members, it is the heir of the pre-war Jewish communities of Bitola, Shtip and Skopje. The history of the Jews in the Republic of Macedonia dates back to the fourth century BCE. The settling of Jewish people took place after Alexander the Great’s conquest of Asia Minor in 330 BCE. There is evidence of Jewish settlements at all ages; however, one of the most important is the remnants of a synagogue in the ancient city of Stobi that testifies to organized Jewish life as early as the third century CE.

The greatest influx of Jews to Macedonia took place from 1492 to 1496 with the expulsion of the Sephardic Jews from Spain and Portugal. The Sephardic Jews spoke Ladino, brought with them elements of a developed culture and suppressed the culture of Roman Jews. The communities coexisted with other nationalities and communities in Macedonia till the Shoah.

On the eve of the Shoah, there were nearly 8,000 Jews and five synagogues in Bitola, and 3,000 Jews in Skopje. On March 11, 1943, 98% of the total Jewish population of Macedonia (or app. 7,200 Jews) was deported to Treblinka by fascist Bulgaria. Those who survived either joined the partisan movement or went into hiding before the deportations.

As it has been a tradition for centuries, the core of communal life is the clubs, such as the Women’s Club, Youth Club and Children’s Corner, and their activities are tightly connected with their area of interest. For example, the Children’s Corner provides for informal education on Sundays when children are taught about the basic concepts of Judaism, holidays, customs and tradition. The women preserve the tradition by transmitting it to the younger generations, by preserving the Jewish cuisine and making handicraft with Jewish symbols.

The activities of the Community are varied. In 2004 the choir of the Community was founded, and it was named after Mois Hason, the renowned Jewish composer and conductor from Skopje who lost his life during the Second World War. The choir aims at preserving and promoting the traditional spiritual and secular music of the Sephardi. Furthermore, the Community has got a library and publishing activity – to date more than a dozen books and translations have been published.

Beth Yaakov Synagogue was consecrated in the building of the Jewish Community in 2000. It was named after the old Skopje synagogue that was damaged in the earthquake of 1963. The new synagogue was built and decorated in accordance with the customs and traditions of Sephardic Jews, and operates as a Sephardic Orthodox synagogue. The parokhet that adorns the Holy Ark is the one that hung on the Ark in the old Skopje synagogue and dates back to 5698 according to the Jewish calendar.

On March 11, 2011, the Holocaust Memorial Centre was inaugurated in Skopje and hosted an exhibition entitled “Macedonian Chronicle: The Story of Sephardic Jews in the Balkans”.

The Republic of Macedonia and Israel enjoy full diplomatic relations that can be described as good and friendly. 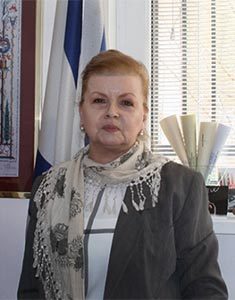 North Macedonia has named its first Jewish member of government

The nomination of Labor and Social Policy Minister Rasela Mizrahi to head the ministry earned her heartfelt congratulations, but also some rebuke from political activists that local media termed antisemitic.
Read more

North Macedonia has dedicated a multimillion-dollar Holocaust museum in the capital Skopje that has been called one of the finest institutions of its kind.

A statement by the Government of Macedonia noted that the country had adopted the working definition of antisemitism of the International Holocaust Remembrance Alliance (IHRA) on March 6.