Israelite seafarers may have arrived with Phoenician traders as early as the 9th century B.C.E. The first Jew known to have set foot on Malta in the Common Era was the apostle Paul of Tarsus, whose ship foundered there in 62 C.E. Greek inscriptions and menora-decorated tombs indicate that Jews lived in Malta in the Roman era.

In the medieval period, following two centuries of Arab rule (870 to 1090), there were about 250 Jews, engaging in commerce, farming and medicine. Under a succession of French and then Spanish conquerors, Jews were forced to pay heavy taxes, build fortifications and finance military campaigns, but they enjoyed special protection of the crown.

In 1492, however, they were expelled, along with the Jews of Spain and Sicily. In 1530, the king of Spain gave Malta to the Knights of St. John, who had been driven out of Rhodes by the Ottomans.

The 16th through the 18th centuries saw constant maritime warfare between Christian Europe and the Ottoman Turks, during which Jews (and Muslims) were kidnapped at sea by the Knights, held as slaves and sold to speculators hoping to turn a profit on the ransom. For this, Malta came to symbolise evil in Jewish literature of the period.

Nevertheless, during the Ottomans’ Great Siege of 1565, Jews volunteered for the desperate attempt to relieve the doomed Fort St. Elmo. Only after the Ottomans were routed did the knights build Valletta and develop the islands, partly with the labor of Jewish slaves. Jewish societies for the redemption of slaves, in Venice and elsewhere, succeeded in ransoming some captives.

In 1798, Napoleon ousted the knights and freed the remaining Jews. A boom in trade accompanied the arrival of the British in 1800, and Jews started coming from Gibraltar, England, Italy, Portugal, Tripoli and Tunisia.

But in 1805, the Maltese organized a campaign against the growing number of foreigners, especially the Jews. The British poet Samuel Taylor Coleridge, a government official in Malta at the time, issued proclamations to protect them.

By 1881, most of the Jews were British (that is, born in Malta, Gibraltar or England). Many were in commerce or finance; others were shopkeepers or tradesmen.

During World War II, Malta was the only country that required no visas for Jews fleeing Nazi Europe. Since the 1950’s, Malta and Israel have had friendly relations and Israeli experts have helped develop local agriculture.

Malta’s Jews live mainly around the capital. They bring a ritual slaughterer from Jerusalem, import kosher wine from Israel and matza from England and, when a boy is born, use a mohel from Rome.

Former President of the Jewish Foundation of Malta Abraham Ohayon moved to Malta from Portugal with his parents in 1934; most of the community’s 20 families (a speck in Malta’s population of 400,000) hail from elsewhere— Libya, England, Scotland and Austria. On Purim 2005, about a dozen adults and half a dozen children came to the synagogue for the reading of the Megilla and a celebration. Ohayon’s son, Reuben, the current president of the Foundation, is also the acting rabbi and provides religious instruction for the children. Though most community members are Sephardic, they use an Ashkenazic prayer book. 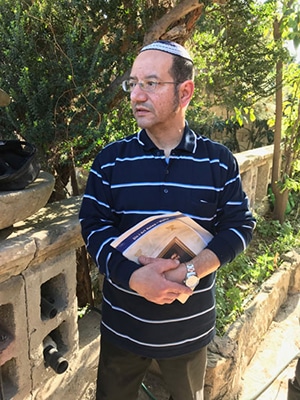 ‘Jewish bones in Rabat are ours’

The Jewish catacombs in Rabat were at the centre of controversy in recent days after Heritage Malta called in police when a Jewish religious...
Read more