The Jews of Italy have strong bi-cultural roots dating back to the second century BCE, when many Israelites, under the leadership of Judah Maccabeus, left the land of Israel to go the “Eternal City” (Rome). They also settled in Naples and in various localities in the southern part of the peninsula. Jews in pre-Christian Rome were very active in proselytizing their faith. It was not until the Jewish revolts in 132 CE, culminating in the destruction of the Second Temple in Jerusalem in 70 CE, that the Jewish-Roman alliance was broken and the Jews were forced into slavery. Approximately 10,000 Jews were transported to Rome to be used as work hands to help build the Coliseum. This image of history remains frozen in time for all to see in the ‘Arch of Titus’, where the Roman victory over the Jews is etched in stone. Although enslaved, the Jewish population in Rome flourished. Thirteen synagogues and numerous Jewish cemeteries were built. Many Jewish communities were established in southern and northern cities in Italy as well, such as Taranto, Ferrara and Milan. Nevertheless, many Romans despised the Jews and considered their rituals to be barbaric.

Throughout history, the status of Italy’s Jews depended largely on who was in control of either the Roman Empire or the Church. The endorsement of Christianity as a ’legal’ religion in 313 CE by the Emperor Constantine marked a transition for Italy’s Jews from an era of acceptance to one of discrimination. The situation for the Jews worsened in 380 CE, when the Edict of Tessa Lonica of Teodosia recognizing Christianity as the official religion of the Empire was enacted, with very little tolerance for Judaism or other religions. After the fall of the Roman Empire (circa 476 CE), the state of Jewish life depended on which invading army or power gained the upper hand. The Ostrogoths (493-553 CE) and Lombards (568-774 CE) treated Jews better, while they later suffered much oppression under Byzantine rule. As the Church gained more power, tolerance for the Jew swayed back and forth: Charlemagne (Charles the Great, Emperor of the Romans, 800-814 CE) defended the civil and commercial rights for Jews which gave them relative tranquillity for about two centuries. Later, Ottoman Empire rulers let the Jews live peacefully as well. After 1000 CE, conditions became more uncertain for the Jews due to the establishment of feudal systems and artisan guilds. Jews were barred from all guilds and were allowed only two positions, that of money lending and selling used clothing. However, their occupation as money lenders helped them to survive and eventually own property, and many feudal lords were kind to their money lenders and protected them from harm.

Benjamin of Tudela’s travels in Italy chronicle Jewish life in the peninsula in the middle of the 12th century. His journals indicate that most Jews lived in southern Italy, especially in Palermo, numbering more than 8,000 out of a total population of 100,000. They excelled in the production and dying of silk. During the same period, Jews also left behind traces of their literary achievements, boasting poets such as Shabtai ben Moses of Rome and his son Jehiel Kalonymos, regarded as a Talmudic authority even beyond Italy. In Italian provinces under Aragon rule, such as Sicily and Sardinia, Jews generally lived peacefully until 1492, when King Ferdinand and Queen Isabella decided to expel all Jews from the Spanish Kingdom. Many fled to northern Italian cities between the years 1492-1541. Over 37,000 Jews left Sicily, never to return. Most headed for Rome and Milan, while many others settled in Ancona, Venice and Livorno, where conditions for Jews were more favorable. By the second half of the 16th century Pope Paul IV (1155-1559) instituted a Papal Bull decreeing that all Jews were to be enclosed in ghettos and wear a ’contrassegno’ (identification), and that each community could have only one synagogue. All civil and commercial rights for Italy’s Jews were revoked as well. Although similar rules had been instituted in 1215, this was the first time these laws were regulated. Many Jews decided to flee the Papal State and go to other states where these rules did not exist. In 1516, the world’s first Jewish ghetto was established in Venice and in 1555 a second ghetto was established in Rome. Ironically, although both were overcrowded and dirty, the study of Torah and Talmud flourished between their walls, resulting in the growth and enrichment, rather than the destruction, of Jewish religion and culture. With the arrival of Napoleon and the French army in 1797, the doors of the ghetto were torn down and the Jews were granted equal rights and treated as first-class citizens. However in 1815, with the defeat of Napoleon – considered to be a ’savior’ by most Jews – the Jews were thrown back into the ghettos and once again their rights were repealed. This era of persecution did not last long, as the Italian revolution of 1848 unified the Italian states under the House of Savoy and the new government granted the Jews full civil and political equality, without religious distinction. The establishment at the end of the 19th century of the united secular Italian State led to a liberal, non-sectarian society.

Although the integration of Jews into Italian society was nearly complete by 1922, Mussolini’s Fascist Movement rose to power at the same time. At the beginning, many Jews supported them. However, in 1929 Mussolini passed the racist Falco Laws, contradicting the freedom of religion sanctioned by the Italian Constitution. In 1938, he declared the Italians to be part of the ‘pure race’, along with the Aryans. Jews were expelled from all public services and schools and many decided to leave Italy in hope of building better lives. In 1931, there were 48,000 Jews in Italy. By 1939, nearly 4,000 Jews had been baptized and thousands more chose to emigrate, leaving approximately 35,000 Jews in the country. During World War II, Jews were interned in labour camps in Italy, but when the north of the country became occupied by the Germans in 1943, the threat to the Jews became critical. While the south of Italy was occupied by the Allied Forces, central and northern Italy, where the Jewish community mostly lived, became German-occupied areas. In October 1943, the Nazis raided the former Ghetto of Rome and deported 2,000 Jews to death camps. In November, they sent the Jews of Genoa, Torino, Florence and other small communities to Auschwitz. By the end of the war, the Nazis and Italian Fascists murdered 7,750 Jews.

A number of Eastern European Ashkenazim, mainly Holocaust survivors, settled in the country after World War II, while many survivors emigrated to the newly-founded State of Israel. In more recent years, Italian Jewry has been bolstered by some 3,000 Libyan Jews who moved to Italy in the late 1960’s and early 1970’s.

There are approximately 28,400 Jews in Italy today. They are concentrated in Rome (13,000) and Milan (8,000), with smaller communities situated in Turin (900), Florence (1,000), Venice (600) and Leghorn (Livorno, 600). Other Jewish communities numbering a few hundred members in each city can be found in Bologna, Genoa, Triste, with even smaller enclaves in Ancona, Naples Padua, Pisa, Modena, Siena, Parma, Verona and other areas.

The continual presence of a Jewish community in Rome for more than two millennia has produced a distinctive tradition of prayer known as ’Nusach Italki’ (Italian version), which is comparable to yet different from standard Sephardi or Ashkenazi versions. A number of synagogues in Rome, including the Great Synagogue, conduct their services following this tradition. The customs and religious rituals of the Italian Jews are viewed as a ’bridge’ between the Ashkenazi and Sephardi traditions, with similarities to both, yet closer still to the customs of the native Greek Jews, the Romaniots. It is often claimed that the Italian prayer book contains the last remnants of the Judean-Galilean Jewish tradition, while both the Sephardi and Ashkenazi versions reflect the Babylonian tradition. Pope John Paul II’s visit to the Great Synagogue of Rome in 1986 marked the warming of relations between the Jews and the Vatican. Until Israel and the Vatican secured a diplomatic accord in December 1993, the Unione was a critical link between the Catholic Church, Israel and World Jewry.

Leading international Jewish organizations such as B’nai B’rith, Keren Kayemet, Keren Hayesod and WIZO are active in Italy’s main cities. In addition, a number of youth movements, such as B’nai Akiva and Hashomer Hatzair offer social, cultural and educational programs to the community’s younger generation. Milan and Rome host Jewish cultural clubs catering to the community-at-large and youth age groups.

There are a total of 4 Jewish schools in Italy, located in Rome, Milan, Turin and Trieste. A majority of Jewish children study at local primary-level Jewish schools but often attend external schools for secondary education. Advanced Jewish study programs, including Rabbinical Academies, are found in Rome, Turin and Milan. Kosher food is readily available, with a variety of kosher restaurants in Rome, Florence, Milan, Venice and Bologna. The monthly periodical ’Shalom’ is Rome’s key Jewish publication, while its counterpart, the Bollettino delle Comunità, is published in Milan. The Unione delle Comunità Ebraiche Italiane (UCEI) publishes three monthly papers: Pagine Ebraiche, Italia Ebraica and DafDaf, the monthly magazine for children. UCEI is also the publisher of www.moked.it, the Italian Jewry portal of the daily newsletter “l’Unione informa” and of the Press Review of Italian Jewry. Many organizations have their own publications. La Rassegna di Israel is an academic quarterly, featuring high-quality scholarly content.

Israel and Italy enjoy full diplomatic relations with the Israel’s Embassy located in Rome. Since 1948, more than four thousand Italian Jews have emigrated to Israel.

Sites of major Jewish interest include: 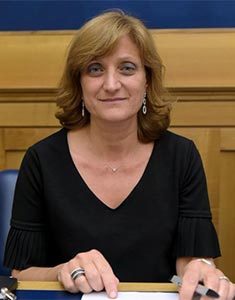 Renovation work on the monumental synagogue in Torino has been completed — and the work was celebrated at Simchat Torah with the dedication of a plaque honoring major donors to the project.
Read more

Italian Auschwitz survivor and Senator for Liliana Segre held her last public testimony at a ceremony in Rondine, Tuscany.

The Italian Holocaust survivor Sami Modiano has been presented with the Order of Merit of the Federal Republic of Germany by the German ambassador, Viktor Elbling, on behalf of the German government. The award was made in recognition of Mr. Modiano work in combating racism and in promoting tolerance especially among the youngsters.