Nowadays approximately 5,000 Jews live in Greece. The current centers of Greek Jewry are Athens (3,000) and Thessalonica (1,000) and a handful of smaller towns, amongst them Ionanina.

Jews played an important role in Greek history, from the Hellenistic period and the early history of Christianity, through the Byzantine Empire and Ottoman Greece, until the tragic near-destruction of the community after Greece fell to Nazi’s in June 1941 and was split up amongst the Axis (Germany, Bulgaria and Italy) forces.

The first Greek Jew known by name is Moschios, son of Moschion the Jew, a servant mentioned in an inscription, dates approximately back to 300-250 BCE at Oropos, a small state town between Athens and Boeotia. How far back goes the Jewish presence in Greece? Nobody knows, but according to Josephus (contra Apionem), an even earlier mention was to be found in the work of the Greek historian Clearchus of Soli, describing a meeting between Aristotle (4th century BCE) and a Hellenized Jew of Coele Syria (modern Lebanon). Archeologists have discovered ancient synagogues in Greece, including the synagogue in the Agora of Athens and the Delos synagogue, dating back to the 2nd century BCE.

The impacts of Alexander the Great unstoppably spread the Greek culture and lead to a unique fusion of Greek and Jewish culture, culminating with the Jews of Jerusalem being divided between pro-and contra-Hellene factions and with the Greek version of the Tanakh, the Septuagint .Greece fell to the Roman Empire without Greek Jews, apart from Cyprus. After the collapse of the Western Roman Empire, the Jews of Greece began to come under the increasing attention of Byzantium’s leadership in Constantinople, imposing special taxes on them, while others attempted forced conversions to Christianity, but with little success.

The first settlement of Ashkenazi Jews in Greece occurred in 1376, heralding an immigration to avoid persecution in Western- and Central-Europe. They settled e.g. in the towns of Kavalla and Siderokastron. From the end of the 14th century refugees emigrated from Spain to Greece. After the country was ruled by the Ottoman Empire in mid-15th century, arrivals from the Iberian Peninsula and from Sicily intensified. In towns such as Trikala, Larissa, Volos and above all Thessalonica, between fifteen and twenty thousand Sephardim introduced their own languages and customs. In the 16th and 17th centuries the Jewish population further swelled with the addition of Iberian marranos. Greece was ruled by the Ottoman Empire from the mid-15th century, until the conclusion of the First Greek War of Independence in 1832.

Prior to World War II over 70,000 Jews lived in Greece in 28 cities where well-organised and flourishing communities functioned. Once the Axis powers occupied and divided the country in 1941, the fate of the Jews was sealed. Those residing in the German-controlled zone were subject to immediate and direct threat. From the almost 50,000-strong community of Thessalonica, fewer than 1500 survived, and thus the renowned center of Sephardi Jewry, once called “the mother of Israel” had seen its final days and came to an end. The Italian forces controlled Athens as well as the region of Thessaly and the islands. The Jews in the Italian controlled zone were and the community was initially protected by the authorities’ reluctance to apply anti-Jewish laws.

In September 1943, when Italy capitulated, Germany took direct control of the Italian zone. In Athens, chief rabbi Elijah Barzilai contacted the Greek Archbishop Damaskinos who gave instructions to all monasteries and convents in Athens and the provincial towns to shelter every Jew in need, which enabled many of them to be saved. A large part of Macedonia and Thrace remained under Bulgarian occupation, which deported over 11,000 Jews of whom 2,200 survived the Polish Nazi camps.

In the autumn of 1944, when Greece was liberated, over 10,000 Jews, almost all of whom were destitute, were in the country. Many of whom made their way to Australia, the United States, Canada, Belgium and Israel. Ioannina, home to a small number of Romaniots, a Jewish population, who has lived in the territory of today’s Greece and neighboring areas for more than 2000 years. Their historic language was Yevanic, a Judeo-Greek dialect, with no surviving speakers recorded, as today’s Romaniots speak Greek. The Romaniots had distinct customs, very different from both, the Ashkenazim and Sephardim, some of them are thought to be based on the Jerusalem Talmud instead of the Babylonian Talmud. In Ioannina 1,860 out of 1,950 Jews were deported to Auschwitz and Birkenau in April 1944, most of them were exterminated by the Nazis.

The Central Board of Jewish Communities (established by Law in 1945) is the umbrella organisation and representative body of Jews in Greece. The Board (KIS is the Greek abbreviation) preserves Greek-Jewish interests, maintains close ties with the government and the official institutions and represents Greek-Jewry at an international level. KIS coordinates and assists the 9 functioning Jewish communities of the country and is also responsible for the preservation of the large number of Jewish sites (monuments, synagogues, cemeteries and old Jewish quarters) scattered around Greece, in cities where, after the Shoah, no Jews survived.

The Jewish Communities of Greece are in charge of the religious aspects of life, social welfare, elderly care, education and culture of Greek Jewry. There are ten active synagogues throughout the country, served by rabbi’s residing permanently in Athens, Thessalonica and Larissa.

There are also Jewish elementary schools in Athens, Thessalonica and Larissa, where Jewish languages and history are taught additionally to the general Greek program. Most communities enjoy a cultural center. Jewish newspapers are published by KIS and by the local communities of Athens and Thessalonica. KIS also publishes the quarterly magazine “Chronica”, dealing with Jewish historical issues.

Diplomatic relations with Israel have been upgraded to full ambassadorial level since 1990. Since 1948, 3,860 Greek Jews made Aliyah.

Ancient synagogues can be visited on Corfu and Rhodos and in Ioannina (Romaniote rite). In Chania on Crete the restored synagogue now functions as a cultural center. On the island of Kos the ancient synagogue now houses the municipal Cultural Center of the island. In Veria the synagogue is situated in a restored building. In Aegina and Delos there are archeological remnants of synagogues.

There are also two Jewish Museums. The Jewish Museum of Greece (JMG-www.jewishmuseum.gr) in downtown Athens is historical and ethnographic. It holds a wide collection of artefacts, documents, photographs and archives on Greek Jewish history, culture and heritage. The JMG also focuses its attention on Shoah Education, with a comprehensive choice of programs for schools, young visitors and seminars for teachers and educators.

The Jewish Museum of Thessalonica (www.jmth.gr) is housed in one of the rare Jewish buildings that survived the city’s catastrophic fire of 1917. The museum’s collection incorporates the Simon Marks Photographic exhibit “Thessalonica Sephardic Metropolis”, a collection of tombstones and inscriptions from the old Jewish cemetery destroyed during the Nazi occupation. Special emphasis is also put in the preservation of the Judeo-Spanish languages and culture. 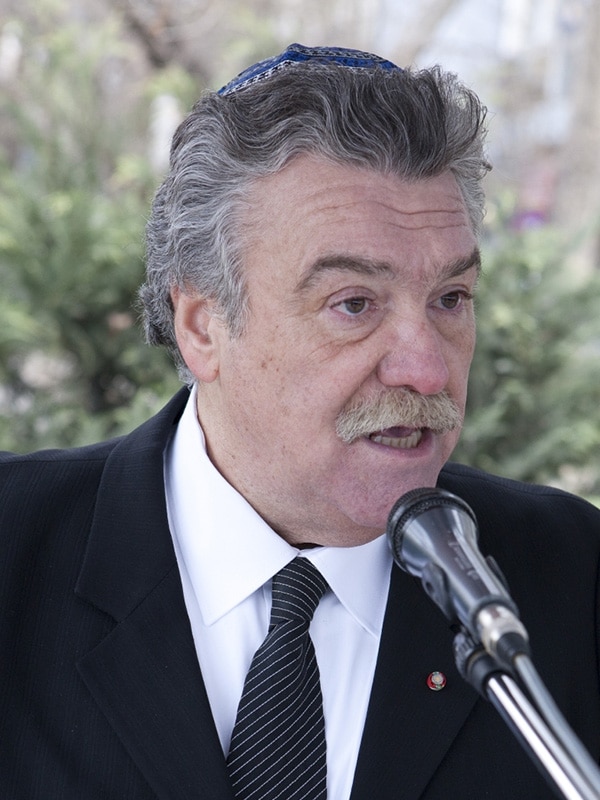 A commemorative plaque was placed at Block 15 of the Haidari concentration camp where Jews and others were imprisoned and tortured during the Nazi occupation of Greece.

Minister of State of the Federal Republic of Germany, Mr. Michael Roth, visited the Jewish Community of Thessaloniki and honoured the memory of the 50 000 Jews of Thessaloniki who were exterminated by Nazis.

Message from Raya Kalenova, EJC Executive VP & CEO on the occasion of the 200th Anniversary of Greek’s Independence

As the Hellenic Republic celebrates 200 years of its independence, Europe’s Jewish communities, brought together under the umbrella of the European Jewish Congress, send...